In 2006, my wife and I found some land along the side of a mountain on the way up White Top road in southwest Virginia. It was love at first sight. The first thing we did was drop a single wide trailer down by the road so we could spend our summer vacations in there and make plans for building a cottage up in the woods.

During those first summers, without the distraction of cable TV, cell phone and Internet, I found that I could decompress to the point of sheer boredom…but in a good way. Casting around for things to do, I read a book called Follow the River by James Alexander Thom. It was based on the true adventures of Virginia pioneer, Mary Ingles, who was kidnapped with her two children and pregnant with a third, by the Shawnee and somehow managed to escape and walk back to freedom through hundreds of miles of rugged wilderness without so much as a knife.

It re-kindled my love for writing and I started a story about a college kid from Christiansburg, VA, who’s consciousness is hurtled back in time to join the body and soul of a young Shawnee warrior on America’s frontier in the 1700’s. The young warrior turns out to be Thomas Ingles, Mary’s eldest son who was adopted and raised by Shawnee parents since he was left behind at age five. The facts of his life were scarce but fascinating, starting with the fact when he was found after 12 years, he knew no English and truly believed that he was Shawnee.

The book is available in Kindle format on Amazon. You can read some first before deciding if it’s for you. Here’s the link. 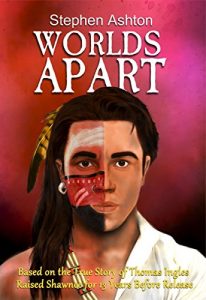